How to Mirror MacBook to TV: Best Solutions in 2022

What are the different ways to mirror a Mac desktop to a TV screen? Simply put, it’s a wired or wireless connection. Different methods are more useful for certain situations - for example, HDMI cables are better for gaming, since they don’t have streaming delay.

But generally, if your Mac and your TV are too far from each other, Wi-Fi with third-party apps is the way to go. We’ll take a look at both methods below. 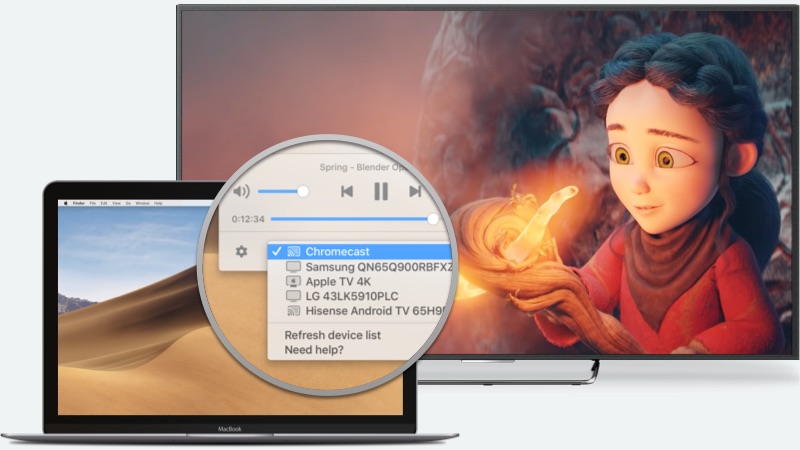 Third-party apps are incredibly helpful when you want to mirror Mac to TV wirelessly and effortlessly. But with so many different apps to choose from, which one is the best for you? How do you decide between price, functionality, interface, etc. Thankfully, we were able to do all the heavy lifting for you and compile a list of the best, reliable, and effective third-party apps for you to try.

This lightweight screen mirror Mac application tops our list of third-party apps. It enables you to mirror Mac to Chromecast, Smart TVs which support AirPlay, AirPlay 2, or DLNA protocols without conversion, complex setup, or additional hardware. Once you have added your files to the app, it automatically picks the available devices on the network.

JustStream is capable of mirroring a wide range of files, including videos, audio, images, and software. It also supports many TV brands, including Samsung, Roku, Panasonic, LG, Sony among others. 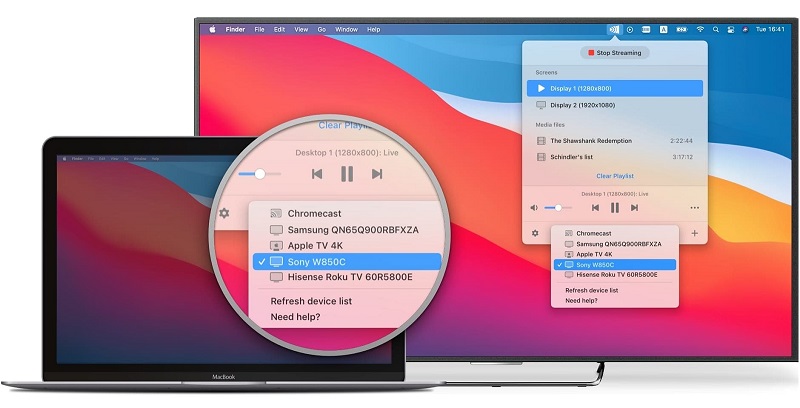 How to Mirror Mac to TV and Other Devices:

Get started in JustStream with these easy steps!

1
Get JustStream installed on your macOS device.
2
Open it and click the JustStream icon on the Menu Bar.
3
Select the source monitor.
4

Push the AirPlay icon and select the receiver. This could be a TV or a Wi-Fi dongle.

Push "Start Streaming". If you want to stop the stream, push "Stop Streaming".

By default, the sound from your Mac won’t be broadcasted. Follow the instructions here to enable it.

By default, the first available device will be selected for mirroring.

If you cannot see the receiving device on the list, make sure that it is turned on and connected to the same Wi-Fi network as your Mac. Then try refreshing the device list.

The screen mirroring settings are accessible through Preferences > Mirroring

AirBeamTV offers you a variety of apps. You can either buy software specifically designed for your TV or obtain a smart TV mirroring package with apps for various TV brands.

These apps usually have a latency period of up to 3 seconds, which makes it impossible for you to mirror real-time gaming. They work best when mirroring movies, presentations, photos, browsing, etc. Whether you are using macOS or iOS devices, the AirBeamTV app enables you to screen mirror Mac to Chromecast, Amazon FireTV, or Roku. What’s more, you do not need cables or other additional equipment to share your MacBook screen. It makes the mirroring process simple and quick. 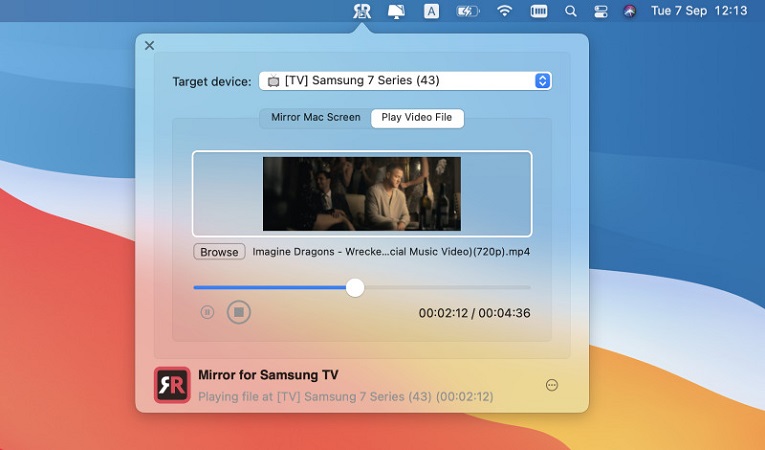 How to Share Screen - MacBook to TV with AirBeamTV:

1
Get AirBeamTV installed on your Mac.
2
In addition, get the audio driver.
3
Click the AirBeam icon on your Menu Bar.
4
Make sure that your TV is on and connected to the same network.
5
In AirBeam, use the drop-down menu to select your TV and click "Start Mirroring".

If you want to share your phone, tablet, or MacBook’s screen to a bigger screen without using cables or doing complex setups, then you should consider AirParrot3. With this app, you are able to share media content from a variety of devices wirelessly.

This app is compatible with macOS, Windows, and Chrome OS. If you want to mirror presentations in the classroom, auditorium, boardroom, or transmit movies in just a few clicks without adapters and cables, you need a third-party app like AirParrot3.

This mirror Mac app also allows you to mirror either the whole screen or just a specific program. Furthermore, there are no distractions when adjusting display settings. Once it’s installed, this app searches for and displays the available receivers on your network automatically.

How to Mirror Mac to TV in AirParrot 3:

1
Install AirParrot 3.
2
Expand the AirParrot widget on your Toolbar.
3
Turn your TV on and ensure that it’s connected to the same Wi-Fi source.
4
Refresh the "To…" list in AirParrot.
5
If it’s not already selected, set your Mac screen as the source.
6
Select your TV from the list. Mirroring should begin.

Instead of using third-party applications, there is another method of screen mirroring Macbook to TV that uses additional hardware.

HDMI (High Definition Multimedia Interface) is a cable that enables you to share HD audio and video between devices. It supports many audio-visual devices such as projectors, Xbox, digital televisions, DVD players, PlayStation, etc.

How to mirror Mac to TV with HDMI:

1
Locate the HDMI port and then plug in the HDMI cable on your TV. HDMI port is usually on the back or the side of the TV.
2
Determine your Mac video output.
3
Buy the correct cable for your Mac. It can be USB-C to HDMI cable/adapter or Thunderbolt 2 to HDMI cable.
4
Plug one end of your HDMI cable in your Mac or port adapter.
5
Turn on your TV and change your TV input to the HDMI input.
6
Now you just need to wait and see your screen on your TV.
Things to note:

Most recent iMac computers have an oval port, also known as USB-C or Thunderbolt. If your Mac has a Thunderbolt 3 port, you need a USB-C to HDMI cable.

Solution 3: Mirror Mac to TV with Apple TV via AirPlay

AirPlay protocol is normally pre-installed in most MacBook devices. This makes it the most reliable and commonly used method of mirroring macOS screens to bigger TVs and other AirPlay-enabled Smart TVs. And it does so without additional hardware or software. This proprietary protocol suite is ideal for education, media, and enterprise. All you need to do is open AirPlay, choose the target device and watch.

How to Mirror Your Mac to Apple TV via AirPlay:

1
Get your Mac and your AirPlay2 Smart TV connected to the same Wi-Fi network.
2
Click the AirPlay icon in the Menu Bar. If you don’t see it, enable it from the Apple menu, by going to System Preferences > Displays.
3
Choose the TV from the drop-down menu. It may be necessary to put in a passcode - you’ll find it on the TV screen.
4
Click the AirPlay icon and select "Turn AirPlay Off" to stop mirroring.

What Is Screen Mirroring?

Often referred to as screen sharing, screen mirroring is the process of duplicating a different display. This functionality is commonly used in conferences, classroom presentations, and video calls.

Screen mirroring on Mac can be done in two ways. You can use a cable to connect your device to the TV screen or install an app. Each method has upsides and downsides - for example, wires have limited length and get in the way, while Wi-Fi has a delay and requires a consistent connection. 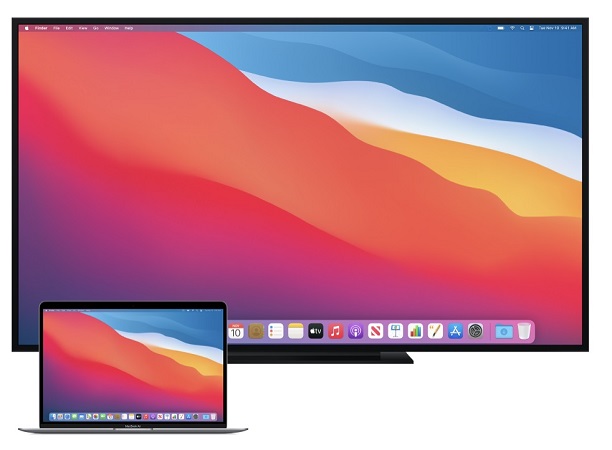 HDMI cables are used to connect devices to an external display. If you are using a device that has an HDMI port, then you only need to connect one end of the cable to the device and the other one to the display. Older devices may not have HDMI ports; VGA was common, and it requires an adapter to connect to HDMI. USB to HDMI also exists, but it’s much better to have a dedicated graphics port.

If you mirror Mac to TV wirelessly, you’ll get similar results to wired mirroring. It’s pretty easy to work with, since most devices come equipped with built-in wireless capabilities nowadays. Not having to deal with tangling cables is another plus.

How to Mirror iOS/iPadOS Devices to macOS or an AirPlay TV:

1
The two devices must be connected to the same Wi-Fi network.
2
Select "Screen Mirroring" from the mobile device’s Control Center. On older iOS versions, you need to swipe up from the bottom of the screen. On newer ones (iOS 12, iPadOS 13, or later), swipe down from the right corner.
3
If everything is set up correctly, the TV or the Mac should appear in the list.
4
If your iPhone, iPad, or iPod requests a passcode, you’ll find it on the TV screen.

To interrupt the process, go to "Screen Mirroring" again, but this time, select "Stop Mirroring". If you’re using an Apple TV, a single press of the Menu button will do the trick.

Can I screen mirror without Apple TV?

Yes, you can Mac mirror without Apple TV. Use JustStream, which is an advanced application that enables you to stream media from your Mac, MacBook, iMac, or Mac mini to your Smart TV, Chromecast, and Apple TV, or DLNA-certified devices over the local network.

How do I turn on AirPlay on my Mac?

In the top right of your MacBook screen, click on the AirPlay icon and choose your preferred mirroring Macbook to TV option. Alternatively, go to the Apple menu > System Preferences > Displays, then choose "Show mirroring options in the menu bar when available".

Is there an app to mirror iPhone to TV?

If the TV doesn’t support AirPlay, there are still some iPhone solutions you can use. Most likely, these solutions involve an additional dongle, such as Chromecast, or a Roku Stick. You’ll also need to use a dedicated app for some hardware - Roku, once again, is an example.