Try the best file manager for Mac – Commander One

What is the perfect Total Commander for Mac solution?

One of the most common problems faced when switching from the Windows operating system to the Apple platform is finding a Mac Total Commander alternative. Despite the native app called Finder is a great file manager it lacks the necessary features to meet all the requirements of the users. There are quite a lot of two-panel file managers for macOS, but in our opinion, the best Total Commander Mac alternative is the file manager Commander One.

After having a quick look at Total commander, let’s examine its alternative, namely Commander One. Quite a lot of Mac users call Commander One the perfect Total Commander alternative for Mac and you can tell it by opening it as when you launch the app and look at its interface the classic two-pane file manager comes into view.

When working with files very often the users move, copy, delete items and so they have to open Finder twice in order to perform this routine.

Commander One is convenient because, thanks to two panels in the interface, you can quickly compare the presence of certain files on different disks and media and with ease move them from one directory to another.

To open any device, click on the arrow at the top of one of the panels, and you will see a list with available media. Select a drive or storage device from the list and it will open in the panel above which you clicked the button. Now you can quickly browse and find the file that you want to move from one location to another. Otherwise, if you did not have this file manager installed, you would have to first open two folders, and then browse the first one and then the second to find the desired document.

There are only ten buttons on the top panel of this Total Commander Mac solution and all of them are important and necessary – you will use them constantly, so it will not be difficult to get used to them. These buttons are divided into three sections and they are responsible for:

At the bottom of the program there are six buttons with the most common commands: view, edit, copy, move, create a new folder, and delete.

As you can see, all the main functions are available with one click of the mouse in this Total Commander alternative – and you will not spend a lot of time getting used to them. You can also call all Commander One functions using hotkeys – their list is available in the application settings and, as provided by the developers, they are all customizable.


What are Commander One features 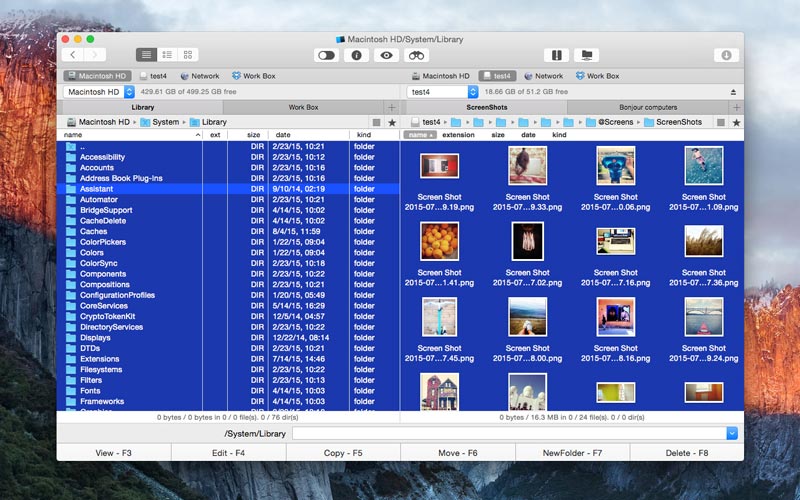 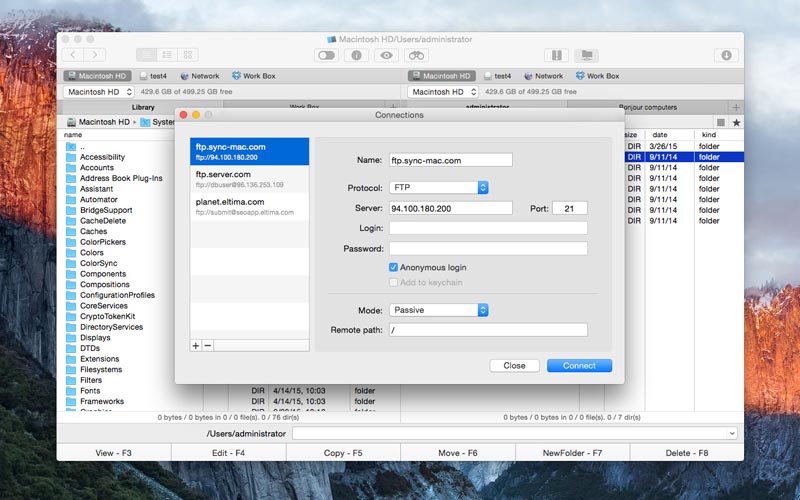 As we all know, features are an integral part of any software. Without the right set of user-friendly features, the software would be useless. The good news is that Commander One is loaded with all the essential features you would want from a good file manager software. It should also be borne in mind that the quality of features is always better than the number of features.

First of all, let's plunge a little into the history of the creation and development of this file manager, and see how from such initially not very pretty manager appeared such a brilliant solution. In general, the idea of ​​a two-window version was implemented almost at the dawn of the era of computers. Probably, some of the readers still remember Norton Commander, which was for many a window into the file world of Dos. Namely from this file manager, all programs, games and other things were opened as well as files were copied, deleted, replaced, and moved by the users those days. The two-window mode of operation was very convenient and did not require the use of a mouse to perform various operations, since the corresponding hotkeys were assigned for this.

Do you know why Total Commander evokes so many enthusiastic feedback from those users who could understand it? The answer is simple, it allows you to save time on routine operations (we most often save, copy, delete or move objects or folders on a computer) and besides, it makes it possible in two clicks to do what you could only dream of, seeing the powerlessness of File Explorer when dealing with dozens of tasks.

What is Total Commander or formerly Windows Commander?

So, the first release of the Total Commander file manager was released back in 1993. Then the program had another name, namely Windows Commander. The developer of this application is the Swiss programmer Christian Giesler, who is updating the program to this day. Since 2002, the file manager has been renamed to the name we know today – Total Commander. In addition to performing the usual actions with various files and folders, starting from version 4, new opportunities became available to the user – installing plugins and changing the program interface. And for more than three decades now, it has very firmly taken a leading position in its niche.

During this time, a lot of Total Commander alternatives and clones of the app appeared (it is worth mentioning the fact that among which there are many free distributions), which were no worse, and in some places even better than the original, but due to the reasons given below, the original is still ideal for many.

Mainly, it is determined by the power of habit, however, the main factor of such vitality was the presence of a huge number of plugins/add-ons for the file manager, which allow you to implement an unimaginably wide range of tasks using Total Commander file manager. Besides that, both newbies and incredibly smart programmers will find something interesting for themselves among the plugins.

What is Total Commander used for?

Total Commander literally means that you get “total control” or “complete control”. This is the essence of the Total Commander file manager – it is needed to manage the file system of various devices. For example, you can control your computer, or removable media, or even use an application to upload files to a remote server. It cannot be said that without this program your computer will disappear, but with Total Commander, it will be much easier and more convenient to perform various operations.

Many people use this particular program, and not the standard Windows Explorer because by default the computer takes a long time to perform operations, and Total Commander works quickly. You can copy, move, rename, cut, and paste almost instantly any files that you have access to. Your computer will quickly turn into an orderly system along with the Total Commander file manager. And although at first, it may seem to you that using the manager is not very convenient, over time you will get used to it, and you will understand that there are many advantages in it.

Wondering what the program can do? Let's talk about the main functions of Total Commander:

In addition, the Total Commander file manager can connect to an FTP server, which allows you to connect your computer and the hosting site. Of course, these are not all the features of the program. We went through only at the ones that are often used by users.


What are the disadvantages of Total Commander file manager

As a rule, there is no such thing as an ideal application and Total Commander is not an exception. So let’s check its negative sides:

As you can see, Total Commander is a multifunctional file manager designed to satisfy the requests of almost any user. The functionality of the program can be expanded even more with the help of constantly updated plugins.

We know that many of you might be wondering why you need a file manager if your Mac already has one. As we explained earlier, the default file manager or Mac Finder is not that detailed in terms of management. Many core features are missing by default, and until now, there has been no word from Apple about adding these features to the software. However, the good news is that you still have great alternatives that you can use.

Commander One is one of the best alternatives available on the market and the excellent Total Commander alternative for those who got used to Windows and finding it hard to switch to Mac. Of course, there are countless options available, but finding the right one is absolutely essential and Commander One is the best choice you can choose.

When was the first version of Commander One released?

The first version of Commander One was released on the 4th of August 2015. The app is constantly updating as deemed appropriate by the developers.

Can I send suggestions for new functions for Commander One?

You can send your feature requests and suggestions at support@electronic.us. Our development team is taking into account all your wishes as we want our software to be perfect and convenient for your use.

What is Commander One?

Commander One is a two-pane file manager with more stability and advanced features that you will never find in your basic Mac Finder.

Why do people search for Total Commander alternative for Mac?

Despite being a good file manager, Finder doesn’t support two-pane mode and lacks some important features.

What does the Total Commander file manager do?

What kind of OSes does Total Commander support?

What are the main plug-ins categories for Total Commander?

There are a lot of pug-ins for Total Commander file manager, but they can be divided into several categories, namely: