Task manager Mac: how to open and use it

When choosing a task manager, Mac users have to decide between different features, price points, and other criteria. The following task monitoring apps serve as a great starting point, and some will be a great option for long-term usage.

Top choice
Commander One
4.7 Rank based on 889+ users, Reviews(524)
Download Commander One

Activity Monitor acts as the default task manager on macOS. Launched with a convenient shortcut, it fulfills the basic functions you’d expect, like terminating apps that freeze or hang. Alternative apps, like a file manager for Mac, e.g. Commander One, can also monitor tasks, providing more tools than Activity Monitor.

Activity Monitor doesn’t just restart or exit unresponsive apps - you can also track memory and CPU use over time, or current values for each individual task. Activity Monitor lets you find processes with a search box, and even view network stats or energy consumption.

If you’re wondering how to open task manager on Mac, it’s simple - press Command+Space to open Spotlight and search for it there. For a quick exit, press Command+Option+Esc to get to the Force Quit menu. 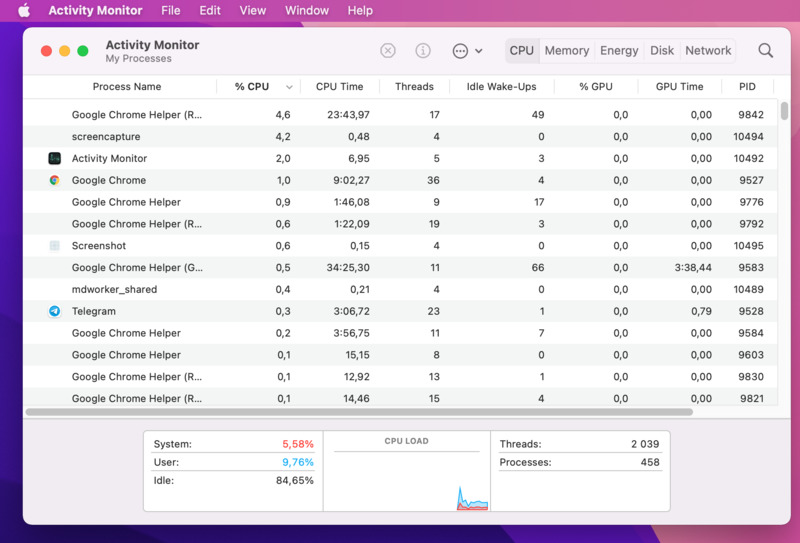 If you want to upgrade your task manager, consider switching to Commander One. It’s a combined application that will fulfill many needs, not just process termination or stat tracking. It’s an FTP client Mac app, a file manager, and a Terminal emulator, in addition to all the other features. 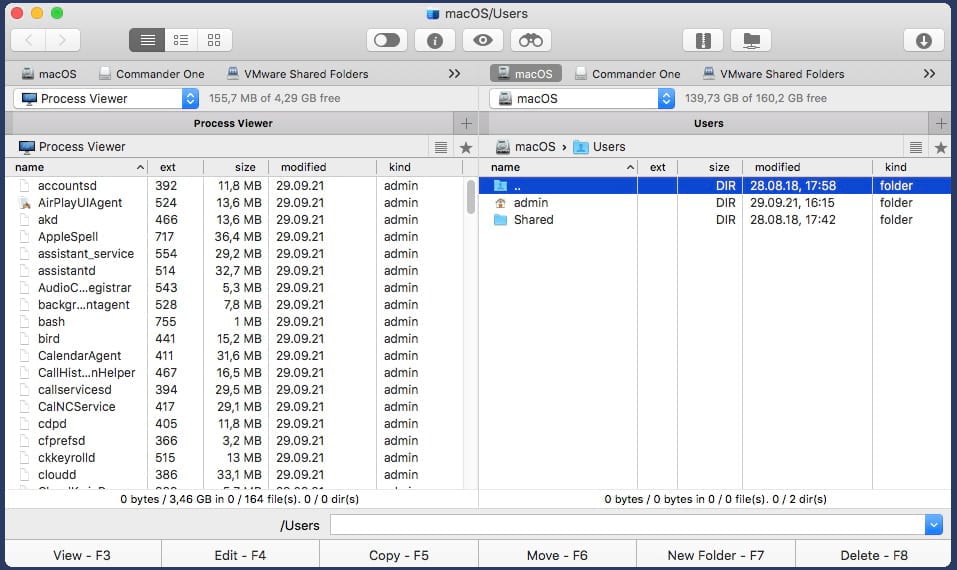 As a dual-pane file browser, Commander one can utilize one of its panels to display process info, including ownership and launch time. It’s the pinnacle of task manager Mac software, combining Finder with the ability to control system resources. It can also integrate your cloud disks, such as Google Drive and Amazon S3.

If you want to utilize Commander One to kill a task, you don’t need to open it - just alt-tab to your active file browsing window, and you can search the process tree in one of the panes. Sort the tasks by any category, or find them based on their names, and Command+Click to open the context menu.

How to Use a Mac Equivalent Task Manager

Commander One is an advanced substitute for Activity Monitor. In addition to the capabilities found in the latter, it can also track the origins of processes, the time of their creation and modification, and their IDs. You also get the ability to terminate system tasks, just as easily as any others (be careful, though). To open task manager Mac alternative, Commander One, you have to do the following:

Install Commander One. Open the application. 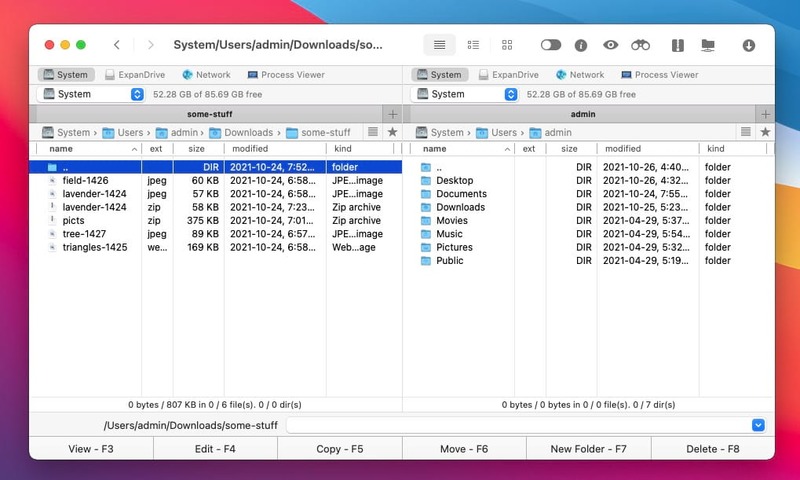 2
Open the drop-down menu at the top of one of the panes.
3 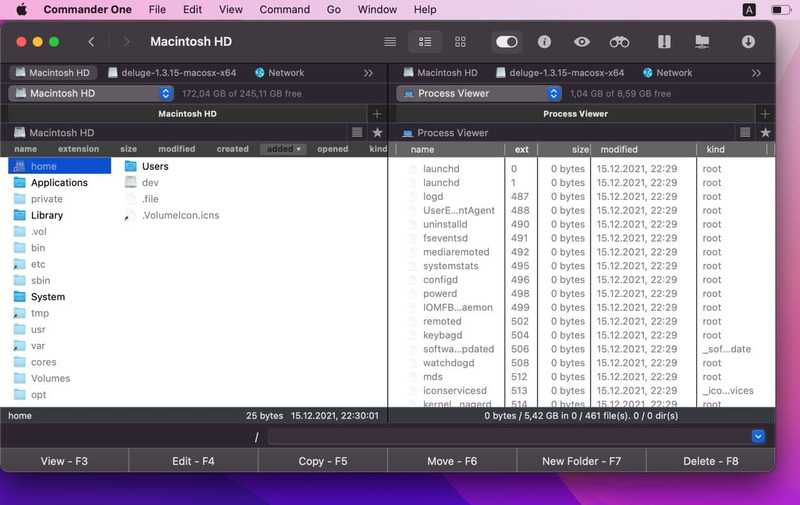 And you’re done! Now, you can have the process list open at all times, in the same window with your folders and files. That’s the main advantage of Commander One - it combines many functions in the same app, and lets you access them from the get go.

How do I open task manager on Mac?

This tool is necessary, whether you’re trying to check memory usage or the percentage of CPU that your apps utilize. You can choose how to open task manager on Mac from two different ways: Launchpad and Spotlight. But there’s no need to limit yourself to system apps, when you have third-party alternatives!

The list of processes is available on Macs in an app called "Activity Monitor". To see running processes Mac users can push a key combination, Command(⌘)+Space, and find Activity Monitor in Spotlight. The app will open up and display a table containing all active tasks.

What is running on my Mac?

All active apps that are running on your hardware will show up in the task list. How to see what is running on Mac? It’s simple - use specialized software to find the tasks and track their memory usage. You can choose between system software or apps like Commander One.

Does Ctrl-Alt-Del shortcut work on Mac?

Just like Windows, macOS has a button combination to reset or shut down your device - Ctrl+Eject. It’s basically Control Alt Delete on Mac. On startup, it’s very common for most software issues, except for malware, to be resolved autonomously in the background, instead of having to fix them manually.

How to force quit an app on Mac?

Cmd+Option+Esc will open a menu that lets you force quit on Mac, even if you can’t access the toolbar. It’s a vital hotkey, one that you’ll need many times if you’re using non-Apple software. Even official programs freeze now and then.

While the default task manager Mac app is easily accessible, and there are plenty of other means to handle rogue tasks on macOS, there’s also room for improvement. You can get an enhanced view of your processes through the use of Commander One and similar software. Also, keep the Force Quit and Shutdown hotkeys in mind for difficult situations.

1. What is Mac's version of Task Manager?

It’s the Activity Monitor. This helpful utility will give you plenty of info. But other apps can fulfill its job - such as Commander One, which includes MTP Mac functionality.

2. Where is the Task Manager?

It can be launched from Applications, or searched for in Spotlight (look for Activity Monitor). There’s a simpler solution - combining your task manager and file manager into a single app. Commander One does this with a Mac terminal emulator included in the mix!

3. Is there a Ctrl Alt Delete function on Mac?

Indeed. This is implemented with 2 different key combos - Ctrl+Eject and Cmd+Option+Esc. If you want an app that implements process tracking with iOS file transfer and Android mounting, try Commander One.

4. What is Task Manager on Mac called?

Activity Monitor is what you’re looking for. It lists tasks, CPU and memory consumption, and other useful stats. Imagine how useful it would be, if it was combined with an archive utility Mac app. Check out Commander One!

Try Commander One as your Mac task manager