Airy: the Best YouTube to MP4 Converter for Your Mac

If you love YouTube and don’t want to refuse from viewing a video when there is no Internet around, you should know some ways how to download your favorite YouTube videos to PC. The best way to get any content from this website is a good third-party application that would quickly convert a YouTube file to MP4 format or to any other quality you need and deliver it to your hard disk without any visual or audio defects. In this article we would like to highlight the best YouTube converter to MP4 available today on the web. It is also a perfect downloading software that is capable to deal with any YouTube video, transform it into any media file, format as well as resolution and safely download it to your computer. In this post we will also focus on MP4 format that is the most popular and compliant with the majority media players.

What’s the best YouTube to MP4 Converter for Your Maс

If you have tried a galore of apps and web services for downloading YouTube content to PC, but the results leave much to be desired, we recommend you to use Airy developed by Eltima Software. 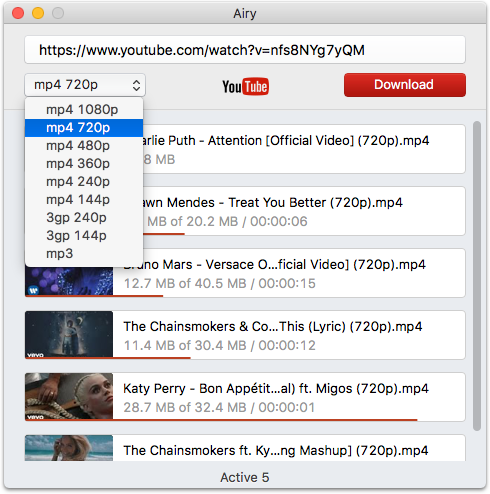 So what is Airy

Airy is your ‘must have’ app if you are going to grab a video from YouTube to Mac. If you need to save YouTube playlists and channels, leave it to Airy as well. The app will cope with this task in moments, so you won’t have to download each video one by one. Its bulk URL downloading feature is unique and is not supported by the other downloaders. You can use it when you need to get several videos in the shortest time. Just copy the URLs to a text file and move them from this file to the Airy search line. The app will parse the URLs and download the required videos to your PC in bulk without problems.

Check out the main Airy features listed below:

Replay Media Catcher is a powerful application that enables you to download online videos from any web site. It also gives you an option to choose a format and resolution of download. Moreover, it allows you to optimize downloaded videos for playing them back on various devices – be it smartphones, tablets, desktops, gaming systems, etc.

The app’s functionality earned it Bronze Reward of Top Ten Reviews in the category of video downloader software.

This app is developed by eTinysoft specifically to download online videos. That is the only thing the app does, that is why we call it the simplest YouTube to MP4 converter – not only in our review but perhaps in the entire market.

The software actually looks like an Internet browser and it has shortcuts to access popular video sharing sites – YouTube, Vimeo, Dailymotion. Once you navigate to any of these web-sites, you can choose the video you need to save and click Download. You will need to confirm your action by clicking in a dialogue box displayed.

This YouTube to MP4 converter not only looks good, but also works well. It is known for its stability and excellent quality of conversion. It might take a while though to learn how to use its functionality. The app allows downloading multiple videos simultaneously, you can pause, restart and cancel each of downloads. One thing you need to know about Xilisoft is that you have to set the output file format before initiating the download.

Jaksta is a compact software tool that can automatically save YouTube videos to your hard drive while you are surfing the Internet. You only need to specify what output format you would like your videos to be saved in. When you are browsing YouTube, for example, the app will notify you of the new video added to the download queue. It will also let you know when the conversion is over.

The app does a lot of stuff without asking your opinion, and while some users are happy about it, others might find it irritating.

If you are one of those users who don’t have much understanding of which video format is better to choose or what’s the difference between formats, you should read the information about MP4 as this type of video leads today’s top. Experienced users may also find additional benefits of converting YouTube videos to MP4. Anyway, here are some useful facts about MP4 format.

MP4 (MPEG-4 Part 14) is a digital multimedia container that is used for storing video, audio, subtitles, still images, etc. An MP4 file can contain several video and audio tracks, as well as metadata that store information about the video title, album, artist, etc. This format allows you to stream data over the Internet. Its official extension is .mp4, though It is also represented by such file extensions as: .m4v, .3gp, .3g2 for video and .m4a, .m4p, .m4b, .m4r, .aac for audio. MP4 is often used on mobile devices. H264 is the default codec for MP4 files.

Why is MP4 format so popular? It’s because MP4 files are lightweight and have a good quality. If you transcode a DVD movie into MP4, you can reduce its size from 4GB to 700MB. This feature has made MP4 format the most commonly used file type for transmitting videos over the Internet. MP4 is widely used in such areas as interactive multimedia, graphical applications and digital television. MP4 files are supported by many video programs and different devices, including the Microsoft Zune portable media player. MP4 can host different kinds of data streams.

If you want to download YouTube videos quickly and trouble free, use Airy, an excellent YouTube converter to MP4 format for Mac computers. The app will do all the work for you, you just need to give it a video link and set the file quality. You can choose the format and resolution to your taste. Airy supports all formats that YouTube content can have, but as a rule of thumb MP4 is the best choice for video files.

Thanks for reading! Share your thoughts, comments and proposals in the comments below.