What are the most useful Terminal Window Mac commands? What is a Terminal window Mac? In the article below you will find the answer to these and similar questions and we hope that after reading it such things as “How to open Terminal window on Mac” as well as Mac Terminal close split window will not give you goosebumps or even a panic attack. Most newcomers to Mac look at Mac Terminal window with fear, since everything that is related to the code is enough for them to put it aside for life. Fortunately, you don’t need to be afraid of the Terminal and think of it as a tool for technicians only. Knowing some of the basic commands can truly expand your experience in OS X. Using it, you can do a lot of things: from moving a large number of files to changing the system settings. To demonstrate the capabilities of the terminal, we will look at some commands that may be very useful to you. 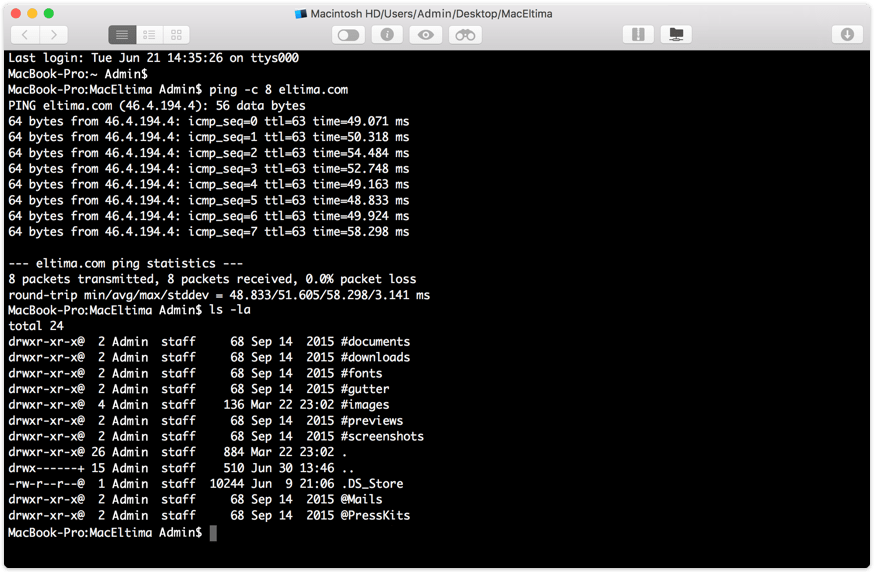 Also, before we begin to dive into Terminal window Mac tips and tricks, it is probably worth spending a few minutes to tell you what is a Terminal window Mac. The Terminal is an emulator that works mostly via typical UNIX commands. Unlike OS X, which has a graphical user interface, the Terminal provides a text-based interface and all commands need to be typed on the keyboard manually. Maybe it is the main reason why it scares regular users.

How to open a Terminal window on Mac

You can open the Terminal on the Apple operating system in several ways.

Note: You can also open the Spotlight search by clicking on the corresponding magnifying glass icon in the upper right corner of the screen.

Let’s figure out the main principles of working with the command line.

We looked at some ways to open the command line in the Mac OS. Now let's see what opportunities it gives us.

1. Prevent Sleeping Mode on your Mac

Sometimes you don't want the computer to “fall asleep” at the most inopportune moment. Of course, you can go to Energy Saver Preferences and turn off the sleep function. However, you can use the following Terminal window Mac command to make sure your Mac will not fall into a sleeping mode. Just type a command in the terminal and press the Enter button: $ caffeinate -t ​​3600.

In this case, 3600 is the number of seconds, so for an hour, your Mac will not dare to fall into a sleeping mode. This is a great opportunity if you want to keep your Mac running almost every time and a useful command if you want to leave your Mac with some serious background tasks.

If you do not want to go to the App Store to download updates then what to do? No problem, you can easily do the same through the Mac Terminal window thanks to the softwareupdate command. To install all the updates you must enter:
$ sudo softwareupdate -i -a.

If you want to completely disable updates, or make them less regular, you can use the command: $ defaults write com.apple.SoftwareUpdate ScheduleFrequency -int 1.

Note that in the example above, the number “1” indicates that updates will be checked every day. If you need to search for the current OS version once a year, write the number “365” instead of “1”.

You will never know when this can happen and sometimes it happens for no reason. The following command causes OS X to reboot if you realize that the system is not responding: $ sudo systemsetup -setrestartfreeze on.

5. Automatic opening of the Finder when the drive is connected

To disable, enter the same commands but do not forget to replace TRUE to FALSE

6. How to turn off the startup sound OS X

How many times did you catch sideways glances in libraries and cafes when your computer began to “sing” when turned on. To mute this sound, use the following command: $ sudo nvram SystemAudioVolume =% 80.

Mac Terminal window will ask you to enter a password and that's it. The Mac will stop howling every time the system boots. To restore the usual sound, enter the command: $ sudo nvram -d SystemAudioVolume.

To see which elements are hidden in the Finder, run the following command: $ defaults write com.apple.finder AppleShowAllFiles -bool TRUE. After that, you need to restart the Finder. This can be done with the command: $ killall Finder. After performing these actions, hidden files on Mac OS will be displayed.

If you have ever taken a screenshot of a window in OS X, you noticed that by default it will always be with a shadow. If you prefer screenshots without a shadow, you can use the following command: $ defaults write com.apple.screencapture disable-shadow-bool TRUE. You can restart your Mac to see the changes or, using another command, apply them instantly: $ killall SystemUIServer.

So now when taking screenshots you will notice that there is no shadow anymore. To undo changes, you can enter the following commands: $ defaults write com.apple.screencapture disable-shadow-bool FALSE $ killall SystemUIServer.

PNG is known as the best format for screenshots. However, it can take up a bit more space. If you prefer to use another format, for instance, JPEG, use the following commands: $ defaults write com.apple.screencapture type JPEG $ killall SystemUIServer.

If you take a lot of screenshots, you can quickly fill them with the desktop. To change this, use the command: $ defaults write com.apple.screencapture location / drag / location / here $ killall SystemUIServer.

To undo changes, you can use:
$ defaults write com.apple.screencapture location ~ / Desktop $ killall SystemUIServer.

The tilde ~ sign represents your home folder. In the example above, this will actually mean / Users / Name / Desktop.

All these commands you can seamlessly run while working with Commander One – a powerful file manager with a built-in Terminal. So in other words, you do not need to go back and forth from one tab to another and enjoy the flawless work without leaving the interface of Commander One. Thanks to the wide range of features the app can become your top choice among the rest of file managers, as it has a classic rather intuitive dual-panel interface, ability to archive and unarchive files, search through archives without extracting the content, ability to work with the online data, as you can mount popular cloud storages and remote servers, ability to work with Android devices as well as iOS devices as with the local drives and many more.

We hope that this little tutorial has helped you clarify the Mac Terminal window and understand that you can achieve much more by using it if you try.

Download
Purchase
4.5 Rank
based on
90 + users Reviews (15)
Recent posts
Task Manager Mac solution: tips and tricks
Allie Hawkins 30 May at 14:48
Is ForkLift as powerful as Commander One?
Olga Weis 12 July at 10:14
How to open RAR files on Mac and compress ZIP archives
Olga Weis 26 Sept at 15:10
Commander One as iOS file manager
Olga Weis 25 Sept at 15:27
Commander One for system administrators
Olga Weis 24 Sept at 15:46
My Android manager – Commander One
Olga Weis 30 Sept at 16:56
comments powered by Disqus