Commander One – reliable tool to use FTP via Mac Terminal

How to find and open Terminal on Mac

There are several ways to get to Terminal on Mac. Below you will find the detailed guide.

With the help of Spotlight

The easiest way to open a program is to use Spotlight search. To do this, follow these steps:

If Finder is running on the device, the Terminal can be launched through the Applications folder:

There are several ways to launch the Terminal tool through the launchpad. In it you need to find the "Others" tab, and the Terminal is located in it. To run it:

If the Others folder is deleted after you change the launchpad organization, use the following method:

With the help of Siri

This method is considered the fastest and easiest. You just need to click on the Siri icon on the menu bar and say "Launch Terminal".

If you regularly use the Terminal, we suggest adding the tool icon directly to the Dock. After launching the tool in any way, it will be displayed in the list of recently launched applications. You need to do the following:

Connecting to FTP server on Mac through Terminal is easy and doesn’t require any complex actions.

Open the Terminal (using one of the ways above) and simply execute the following command in Terminal: ftp ip-address 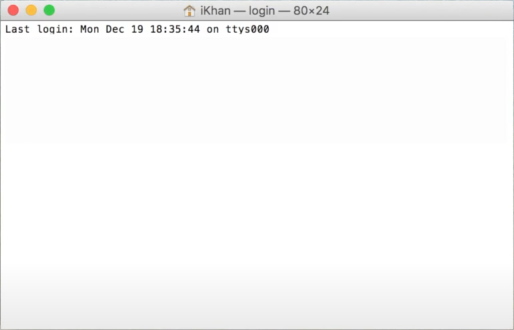 2
You need to change ip-address to the IP address of the FTP server you want to establish connection to.
3
After the connection is established, you will need to insert your username. When inserted, press Enter.
4
After that, enter your password and press Enter.
That's it, now you know the answer to the question “How to access FTP on Mac from Terminal?”

Basic commands to FTP from Command Line on Mac

Most of the FTP commands are the same or identical to the UNIX FTP commands you enter on the Linux command line. Here are some basic FTP commands that will facilitate your workflow.

How to FTP from Command Line. Common actions

This memo lists the most frequently used Mac Terminal FTP commands that will allow you to communicate freely with any server with any set of options.

You can add a new folder by using the mkdir command on Mac. The procedure is easy and doesn’t require a lot of time.
mkdir directory_name

If adding a folder is not a complicated task, creating a new file requires more actions to do. To create a file in Terminal on Mac you need first of all to have a copy of the file on your laptop before uploading it to the server.
!touch file_name
put file_name file_name

Changing files names on the server

You can also manage files on a remote server and rename in Terminal on Mac the files to have the correct file names.
rename old_name new_name

Moving files on a remote server

With a simple FTP move command you can flawlessly move any file on a remote server as if you were using FTP client for Mac.
rnfr_from_path_file_name rnto_to_path_file_name

To send files to the server, you need to use FTP put command and know the full paths to the files on both local and remote machines.
put path_to_local_file remote_file

In order to download file from Terminal, instead of the put command, you need to enter get and the filename:
get path_to_remote_file local_file

How to use FTP command line to delete a folder? Well, it is rather simple, all you need is to execute the following command:
delete file_name

Having permissions is an important thing as wrong permissions can harm your web app. That is why in order to check the permission the following command is used:
ls -l file_name

Commander One – third-party Terminal for Mac

FTP file transfer can be performed using various graphical clients. They are more convenient to use and you do not need to panic each time you need to FTP from command line. Let’s take a look at Commander One – a handy dual-pane file manager with an impressive set of features for better and convenient management of your files. 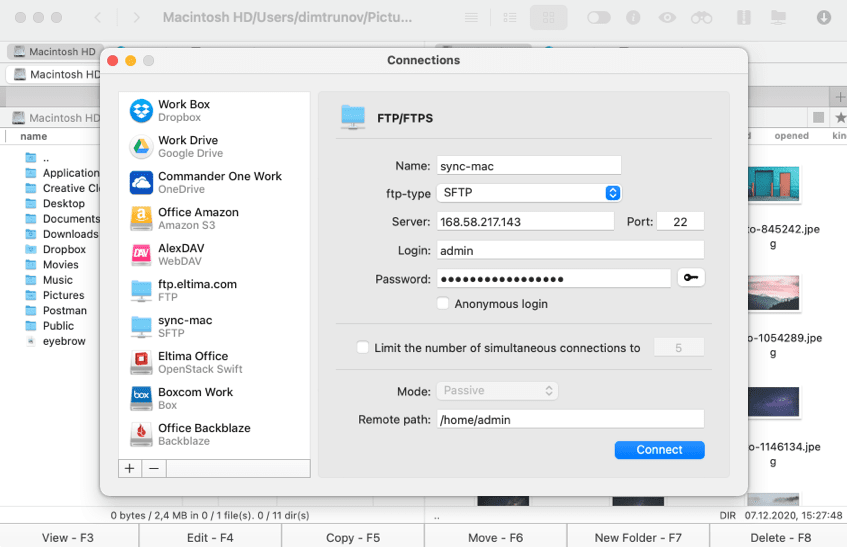 While using Commander One you won’t need to have many apps installed, as everything you need can be found in this app. Here you can find an impressive archive utility, tool for working with MTP, Android, iOS devices, handy feature to view hidden files, it's one spot to work with cloud computing services and way more. Besides that, Commander One is a full-fledged FTP client for Mac that’s why you don’t need to use Terminal to be able to transfer files back and forth.

The app offers full protocol support and encryption features for adding an extra layer of protection to your online files. However, if you are an avid fan of the Terminal you can simply FTP from Mac via Terminal built-into Commander One without leaving the app. Check it out and see what else it can offer you and how it can facilitate your work.

In this article, we have covered FTP file transfer, as well as how to use FTP via Command Line for transferring, downloading, managing files etc. without Installing any third-party software. Nevertheless, FTP clients are more comfortable to use and usually offer additional features for file management, that is why if you are not into FTP Terminal thing, they can come to your rescue. We hope the information will be useful for you and you will find something interesting and useful.

FTP is one of the most popular ways to transfer files to a server among webmasters and users. File Transfer Protocol is a fairly old technology that has been used to transfer files between computers since the dawn of the Internet. But it still retains its popularity due to its simplicity and reliability.

By executing the following command ftp ip-address you will establish the connection after that you can execute different commands from the list above to fork with files.

There are several ways to enable FTP on Mac, namely through Finder, through Command Line, browser or by using third-party software.

From the Finder Menu Bar, select Go> Connect to server.

5. How do I use FTP from command line?

6. What are the FTP commands to transfer files?

There are several FTP commands to transfer files, namely: